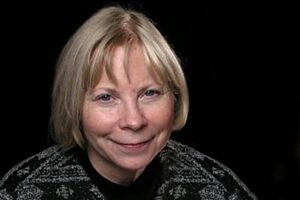 Everything Stephanie knows about stringed instruments she’s learned from the master, Luis. Although she did play violin and viola as a youngster, generally all that was required of her in orchestra was to play massive amounts of whole notes and not too many varieties of those. She never had to bother with those annoying flats and sharps or combinations of quarter and eighth notes .

Stephanie grew up in the sleepy little coastal town of Marion, Massachusetts and has a BA in theater. She first came to Boston in 1975 and paid her dues by working for Sarah Caldwell in the Opera Company of Boston. It left her dazed but convinced she could do almost anything. After two years of what could only be called a baptism by fire, she left to become a Boston Special Police Officer, hired as a store detective for the store Jordan Marsh, Boston. While being a crime fighter enabled her to regain her sense of right and wrong and recover from the scars of her previous job, she put away her gum shoes and bid farewell to the petty thieves of Boston when called by the Boston Symphony and offered a job in the Tanglewood box office.

Working for the Boston Symphony was enchanting. Symphony Hall is an exquisite place to be and walking through the halls to go from one office to another is a joy. As the seasons changed outside, so too did the rhythms of Symphony Hall. As Tanglewood grew nearer, the stacks of tickets grew smaller and so did the time of her employment, but she was hired by the subscription office and eventually moved up to the development office as the Data Manager.

At night and on the weekends, Stephanie also worked as the managing director of the Ally Theater, a small repertory company in Cambridge, MA.

Stephanie met Luis at Symphony Hall and eventually they married in an upstairs/downstairs union. Stephanie continued to work for the development office until their daughter was born in 1990. The enchantment of Symphony Hall paled in comparison to being a mother and after 13 years at the BSO, she left to be at home full time.

During the first year of marriage, Luis (Louie) started experimenting with fiber glass in the cellar, working on a small broken card table, with one light hanging over it, filling the house with fumes. “Don’t you suppose if people could play on plastic cellos, they would already be doing it?” she complained. As the woman behind the man, she ridiculed him at every chance. “This is crazy!” “The house smells”. But then he strung up his first cello and not only did it sound like a cello, it sounded like a great cello; he made a believer out of her. As he continued to make two more models she would help in crises when an extra pair of hands was needed or something wouldn’t come out of a mold.

It took twenty years of marriage before she started to realize how much Louie knows about instrument making in general and how completely in the dark he is about anything invented after 1950. He knows all about the instruments and Stephanie knows how to get messages off the answering machine, load the dishwasher and use the computer. She’s not just the Vice President of Luis and Clark, she is also the janitor and proud to be the wife of the savant.