Even dragged through snow, your cello can stay in tune.

Home/Disasters/Even dragged through snow, your cello can stay in tune.
Previous Next

Even dragged through snow, your cello can stay in tune.

To the makers of Luis and Clark cellos, A short anecdote about the Luis and Clark cello….
My daughter and I live in the San Luis Valley in Southern Colorado. We have real winters here. On our way home today we encountered blizzard blowing snow conditions on the county road out to our house. finding people stuck in drifts, blocking the road , we attempted to go around on another road but ended up with my Jeep stuck in 3 foot drifts. Faced with a 2-3 mile walk through deep drifts with whiteout conditions, we bundled up and set out for home.
I could not bear to leave my cello in the car due to risk of theft or being demolished by a snowplow… besides who wants to be snowed in without their cello?! My Luis and Clark cello is housed in a molded SKG case, so I flipped it over on it’s face and dragged it like a sled, with the molded part of the case that protects the strings and bridge acting as a sort of keel/runner….
Anyway, when we made it home I let it sit for an hour or so while the snow melted off into a pool on the greenhouse floor. Upon opening the case I found that drifting snow had gotten inside and there was water running down the face of the cello. So I dried it off with a paper towel and sure enough, it was not only playable, but still perfectly in tune!!!!! Now that I can feel my fingers again, I am going to go play it!
I am consistently amazed at the changes in temperature and humidity that this instrument can withstand – and still sound good all the time!!! 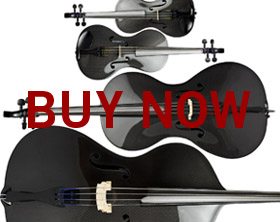 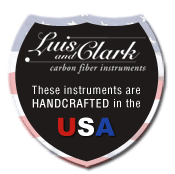